My first race in Michigan in years was a race filled with firsts.  Some of them welcome, some of them, not so much.  The first "first" is that this was the first race I could walk to.  Across the river from my apartment is Bloomer Park, a Rochester Hills city park that is filled with narrow trails.  A perfect setting for the Bloomer Boogie 5k—a cross country race.

Notice the Spikes of Doom and the awkward giganto-chip

While I was worried that I would be the only person wearing spikes, my fears were assuaged when another guy shows up with spike.  The difference between he and I was that he was fast and I wasn't.  Spoiling the ending here, but this fellow won the 5k, and with a time of 17ish minutes, he was the only person to break 20 minutes.  So, it's clear that one of my firsts was not that I took first place.

The race begins, and to spare you the minutia, I'll say that the first 2 miles were good.  I averaged 7 min/mile, and the course was wonderful.  It was really narrow in places, so it was all about strategy.  I needed to get out quickly, and surge when it opened up.

As I was going downhill on a narrow path with a slight curve, I noticed a wooden footbridge about 5 feet in length traversing a small ditch.  Knowing that spikes can get caught in the soft wood and cause a tumble, I was very focused on getting my footing correct on the bridge.

With all that concentration, my right foot caught the ground, and down I went, Superman style.  I landed in a surprisingly soft pile of dirt and skidded along for a few feet.  I quickly rolled to the side to avoid being trampled, and then I got up and kept moving.

My running mojo was shot.  I wasn't in a whole lot of pain, but I lost my groove and could only muster a final mile of 9'30".  Not my best performance.  But, after crossing the line, I stopped at the awards table and a woman asked me my age.  I blanked out for about 5 seconds, then replied with "25". 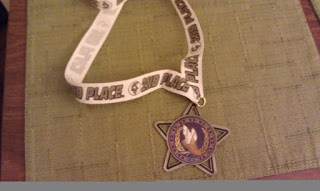 So, that's my other first—my first age group award.  And while I got this cool medal, it was a completely unsatisfying experience.  After the tumble, my race was awful, and I didn't really deserve a medal for that performance.  I'll explain away the 2nd place by saying the overall winner was in my age group, so he wasn't counted in the age group awards, and that the remaining guys in the age group numbered 4.  So, I basically got 2nd place by default.  And that sucks.

I didn't survey the damage to my knee until after I finished, and while it wasn't bad, it wasn't pretty either. There must have been a few rocks in the soft dirt, and my knew was pretty scraped up.

This photo was taken just after I got home, but it looks much worse now.  There are some scrapes and scratches in there that make it look like I was attacked by a large cat, and the muscle is pretty tender right now.  Nothing a little time won't heal, but it leaves me with this question:

Oddly, I want to do this race again next year.

Fun Side Note:  After I arrived, I saw a name on the registration list that I recognized.  It was the same name as one of my cousins.  I didn't know if would be the same person, but I saw my cousin cross the finish line on what was her first-ever race.  Congrats, Jessica on finishing your first 5k!

Check Out These Blogs